When We All Get To Heaven


A man walked up to Ed and handed him a pink slip of paper. He liked that. He liked to see the haste and the fast movements, people on their way somewhere. Where were they going? Lord knows, but they were aiming to get there. After he came back from overseas at twenty-seven he settled on pipes. His daddy had said, Folk always gone need somebody to fix they pipes. He got a job working for old man Yancey Carter for a while, who was a white fellow, but a fair fellow.

He next took a job down at Camp Lejeune. Today he had three people working for him, and he had no complaints. No sir. Put two girls through college. He stood for a spell watching the scruffy teenagers on their skates—the kinds that look like ice skates with wheels—and it made him smile. Ed Phelps was two years shy of his sixtieth birthday, and he could say in all honesty that he had no notion of retiring.

Besides, he was in good health. Isaline watched his diet like a hawk.


Doctor said his cholesterol was low. He wore that day the suit Isaline had bought him for his fifty-fifth birthday—and it still fit—along with a red tie his son Edmund had given him for Christmas. At 53rd Street, for no particular reason, Ed decided to turn west again. He was feeling fine.

Adventuresome even. Enjoying his walk. Ahead of him—about mid-block—he saw a large group of young people, mostly white folk, gathering. Why, he did not know. Boys and girls mostly they were, dressed casually in their T-shirts and jeans. This was fun. This was a lark. Pardon me. A white stretch limousine pulled up at that moment a Lincoln, Ed Phelps took note , and the crowd of which Ed was now plum in the middle began to buzz like a hive of hornets.

A door flung open and two leggy white women dressed—barely—in one-piece black outfits that left not one thing to the imagination except the color of their pubic hair, emerged from the car. The man chewed gum and had a sneer about his face, and quickly slipped on a pair of dark shades. He wore a black leather jacket over a T-shirt that was shredded, showing his pale underbelly, and his pants were like vinyl—but Ed quickly thought better and figured they had to be leather, and next reckoned that those pants had to be mighty hot on a day like today, even if you were riding around in the back of a limousine.

The doors to the building swung wide and three gorilla-sized men rushed out to push the crowd back, creating a path between this Billy man and the door. It just so happened that Ed Phelps stood at that path, just like the adoring fans. Though he had to admit it was a little exciting. This ejaculation caused nearly everyone to pause—the two long-legged women, the three grizzly bear security men, a quantity of the nearby crowd—Ed Phelps. And before Ed could say—What? The hallway itself was dim and dingy and narrow, and Ed had no choice but to follow along with the pack, as he was in their midst.

Directly they came to a larger room. The door was open and several people, some in suits and some in nice dresses, lolled about, but perked up when Billy walked through the door. The back wall was one long mirror above a long table full of bottles and jars and brushes and tubes. She did not smile. And at that very moment it was quite clear to Ed Phelps that Billy was winking at him, his back turned to the Francesca lady. To be sure, this Billy fella was up to something and wanted Ed to be in on it. But the question was: Was he up to good or to no good? Francesca said not a word. 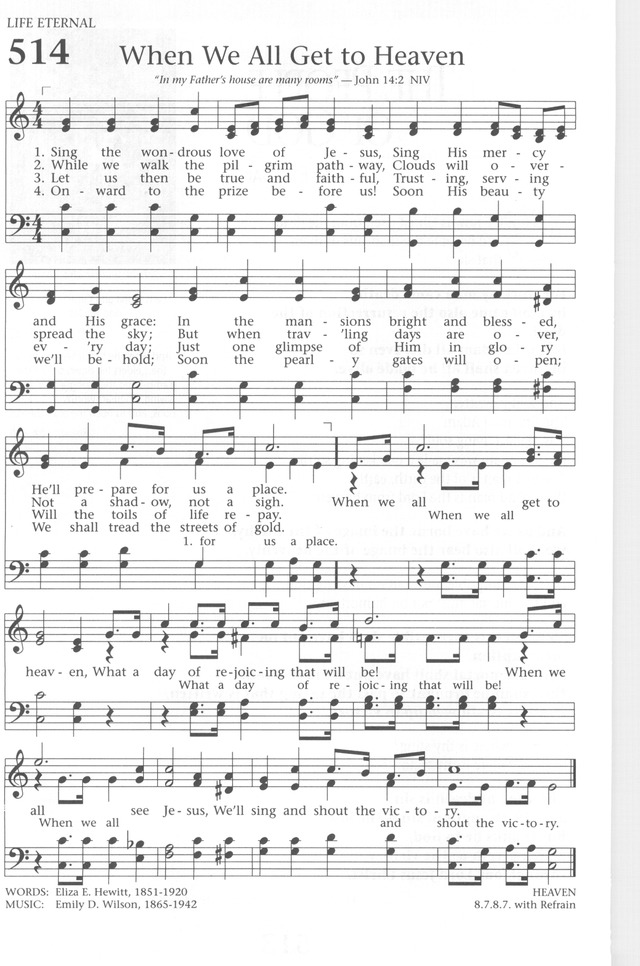 She simply stared at Billy with her rattlesnake eyes. She was dressed in a black dress that could have been spray-painted on her swamp-weed frame.

Yes, Harvard—and a Ph. Thanks to you and your little come-back album, I own your little British ass. Did you say own? I mean how insensitive can you be? I mean, how old are you? The Deacon and his Hounds of Hell.

History of Hymns: 'When We All Get to Heaven'

From Hell. Yeah, I thought you might not. Lord, this boy could tell a good lie. His cigarette almost done, Billy took a long draft followed by a long pause. His eyes seemed even darker and more impish.

Brad Paisley – When We All Get To Heaven Lyrics | Genius Lyrics

Francesca let out a big sigh and looked at her watch. Billy walked over to a corner, smoke flowing like fog from his nostrils, and picked up a case and put it on a table. He undid the latch and the top gave a slight creak open. A guitar. Of course. Just wood and wire. Billy ran a finger over it and looked directly at Ed Phelps. Ed Phelps beheld the guitar and he beheld Billy. He wanted to shake his head, No, but something about the entire situation tickled him, and he grinned despite himself.

Billy himself grinned right back at him. Ed Phelps picked up the guitar and began to strum. The tuning did not take too terribly long, and, truth to tell, though Ed Phelps had not picked up a guitar in over fifteen years, and had probably forgotten more than he had ever known, as he strummed and hummed to himself, doorways in the back of his mind began to slowly open, then more and more, one by one, two by two, four by four, and he remembered his grandfather and how he played and how he taught Ed to play, and he remembered playing on the back porch with Mr.

Ed Phelps put an end to the song with a sweet ping and a run that brought back blueberry-pie memories. I would mind, Billy. He can watch the show. He can even bring little Mrs. Deacon and his hellhounds for all I care. But he is not going up on that stage with you, bubba. You dig?